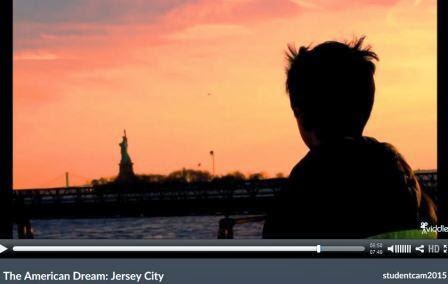 Joseph Sexton, Explore 2000 third year student, recently participated in C-Span’s StudentCam documentary competition – the annual national video documentary competition that encourages students to think critically about issues that affect our communities and our nation. Explore 2000 students and staff would like to congratulate Joseph on winning 2nd prize nationally, out of nearly 5,000 participants. Joseph’s film, The American Dream: Jersey City, focuses on diversity and the impact of President Obama’s immigration policy.

His prior work has focused mostly on producing fictional narrative films that Joseph says, “gives me the freedom to be as creative as I want to be”, whereas this film concentrated on producing a neutral, hard news documentary lasting no longer than 7 minutes. Joseph’s mom, K.K. Sexton, says, “The American Dream: Jersey City, was Joseph’s first effort at a news documentary and according to him, “I felt my challenge was to make it both balanced and interesting”. Joseph’s film will air nationwide in its entirety on Wednesday, April 1, 2015, during the network’s morning news show.